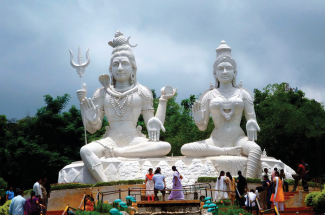 “THE REAL INDIA”  Summer in India VisakhapatnamSummer II, 2019 (July 7 - August 16, 2019)This program is based in Visakhapatnam (also known as Vizag), the largest city in the state of Andhra Pradesh located on the Bay of Bengal coast roughly half way between Chennai and Kolkata. A smaller city by Indian standards (about 2 million people) and generally off the tourist beaten path, Vizag offers an opportunity for students to live in and learn about India in an in depth and casual manner. Students will explore and study cultural, historical, and religious sites located in the vicinity of Vizag (see below) and have opportunities for undergraduate research, independent study, and/or community/service learning. Housing and food will be provided for in the quiet community of Lawson’s Bay, located near the oceanfront and Kailasagiri, a mountain with a cable car! The program coordinator is Dr. Peter Schmitthenner, a specialist in modern Indian history who has lived in India for over 20 years. Local arrangements will be coordinated by M.V. Krishnayya, retired Professor of Philosophy and Religion at Andhra University, who has worked with American students and scholars for about 50 years!Excursions

Find out more about the program here. Applications due March 8th.To get more information on applying as a non-VT student click here.