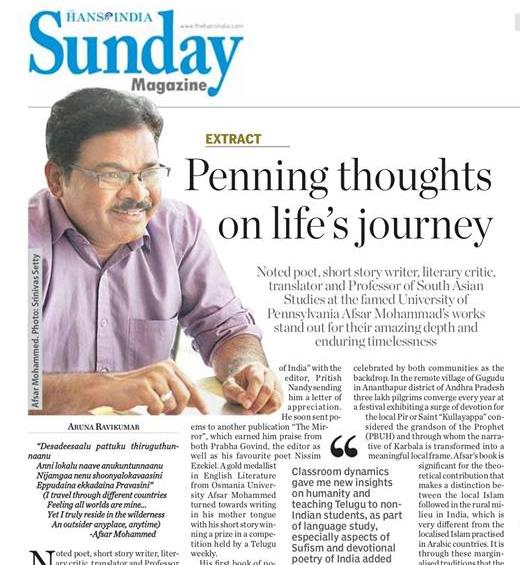 "Afsar Mohammad, a lecturer in South Asian cultures and Telugu studies at the South Asia Studies Department at the University of Pennsylvania, has just published his fifth volume of poetry entitled “Inti Vaipu” (Homeward Bound). Afsar is a celebrated poet, short story writer and literary critic in his home language Telugu. On this occasion, India’s prominent daily newspaper THE HANS INDIA, published a special story about his new book and his work as a poet and South Asian scholar.

(I travel through different countries

Feeling all worlds are mine…

Yet I truly reside in the wilderness

Noted poet, short story writer, literary critic, translator and leading scholar of  South Asian Studies at the famed University of Pennsylvania  Afsar Mohammed's words have the flourish of an artist and the depth of a philosopher as they articulate his thoughts on his life’s journey  away from home yet centred around it. His poetry has a balance, cadence and vision mirroring his inner conflict and quest for identity. Afsar’s angst and predicament of having to prove his credentials based on the religion he belongs to both in the land of his birth and  his destiny, his reflections enriched through experience in a  diverse pluralistic society and reaction to events around him are part of his poetic narrative making his works a compelling read. His fifth book of poetry “Inti vypu” (Homeward bound) is not a piece of nostalgia about his home land according to him. “It is a mature redefining of the past to look at the future with renewed vision” he clarifies.

Growing up in “Chintakani” in Khammam district as the son of well known progressive poet Kaumudi, Afsar’s love for poetry was kindled while he was in school. Encouraged by his teachers he read poetry by Wordsworth, Shelley and Keats and lapped up both Telugu and Hindi works of prose and poetry as his father was also a Hindi teacher. Having read a number of autobiographies, war fiction and narratives on slavery, he was inclined to questioning the hatred that people nurtured for another. His first work of poetry “On the wedge of enmity” was published when he was in his teens by “The Illustrated Weekly of India” with editor, Pritish Nandy sending him a letter of appreciation. He soon  sent in poems to another publication” The Mirror” which earned him praise from both Prabha Govind, the editor as well as his favourite poet Nissim Ezekiel. A gold medalist in English Literature from Osmania University Afsar Mohammed turned towards writing in his mother tongue with his short story winning a prize in a competition held by a Telugu weekly.

His first book of poems “Raktasparsha” (touch of blood) was published along with works of two other friends Prasen and Seetharam. “It was an accidental publication with my friend Seetharam deciding to put my diary jottings into print” laughs Afsar. The book however established him as a poet of reckoning, winning him critical acclaim. His next compilation of poetry, “Evaala’ (Today) won him a prize from the prestigious “Free verse front” along with a dozen other awards. He was to win a string of awards from the Telugu University for his collection of critical essays on modernism and post modernism and other works of poetry.”Valasa” a work on emigration and relocation seemed to guide his destiny as well and he began his academic stint abroad in 2002.  Relocating to America with his partner and well known writer Kalpana Rentala and their son Anindo, Afsar feels his academic career helped his growth as a poet. “Class room dynamics gave me new insights on humanity and teaching Telugu to non- Indian students, as part of language study, especially aspects of Sufism and devotional poetry of S. India added depth to my work” he confesses.

Sufism and Hindu Muslim relations are a recurrent theme of Afsar’s works both in prose and poetry. Through his book “The Festival of Pirs:  Popular Islam and Shared Devotion in South India”, he explores the confluence between an Islam and Hinduism with the Muharram festival celebrated by both communities as the backdrop. In the remote village of Gugudu in Ananthapur district of Andhra Pradesh three lakh pilgrims converge every year at a festival exhibiting a surge of devotion for the local Pir or Saint” Kullayappa “considered the grandson of the Prophet and through whom the narrative of Karbala is transformed into a meaningful local frame. It is through these marginalized traditions that the author who has an abiding interest in Sufism, the esoteric aspect of Islam laying emphasis on spiritual consciousness, universal love and humanism seeks to focus on. Yet he states unequivocally that looking for commonality is at the root of strife and celebrating diversity is the only way to forge understanding.

His next project is a monumental work based on the 1948 Police action in Hyderabad. The author is of the opinion that this was an aspect of history that was unfortunately relegated to insignificance. His work based on a social and cultural reconstruction seeks to provide a better understanding of Telangana’s history and culture. Away from the country but closer to it than ever before Afsar’s verses beckon the reader to introspect -

(Learn the art of untying the knots

Hasten…before the soul departs the body

Set aside everything that is apparent

Seek instead that which appears not)

As the mystic outpourings of the Sufi’s channelize his energies and refresh his thought Afsar Mohammad’s works stand out for their amazing depth and enduring timelessness.