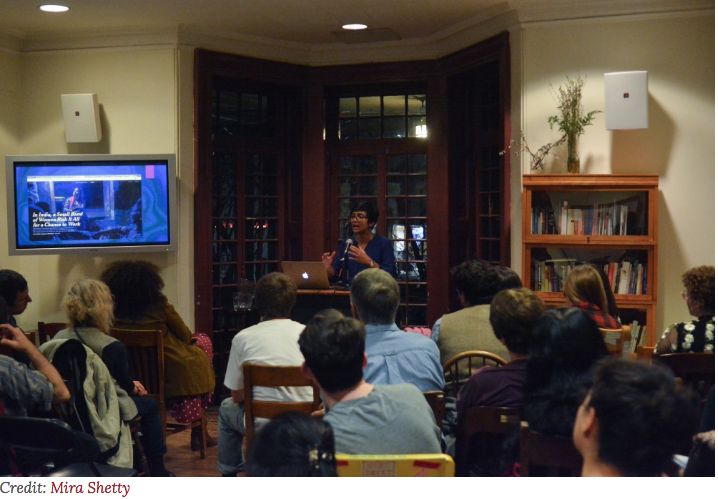 
Award-winning NPR Journalist and Editor Rhitu Chatterjee discussed her work in covering violence against women in India at the Kelly Writers House on Feb. 20.

Attendees filled the space at the event titled “Reporting on Gender Violence in India," a discussion sponsored by the Penn South Asia Center and the Pulitzer Center on Crisis Reporting.

Chatterjee explained how she began investigating gender issues in India after the international coverage of the 2012 New Delhi gang rape and murder of Jyoti Singh. Along with legislation passed to combat sexual assault, men and women collectively became more inclined to openly address violence against women. This marked a progressive push to end the silence surrounding misogyny.

At the event, Chatterjee discussed her style of reporting.

“My background is in science journalism. So, I think my experience, writing about things that involve data and numbers make me very skeptical and cautious,” she said. “My journalistic objective is to always get to the truth. I like going deep.”

During the event, Chatterjee showed multiple examples of her journalism on this issue in India. She repeatedly expressed her drive to create a comprehensive, accurate portrait of gender issues in India and the underlying tensions influencing them. This determination has led her to win two reporting grants from the Pulitzer Center.

She shared an anecdote about covering the "Why Loiter"movement.

After the 2012 gang rape, there was a cultural backlash insisting that women must remain indoors at night to avoid assault. These women resist this notion by wandering in groups at night. Chatterjee recounted her experiences walking with these women at midnight.

Megan Reed, a School of Arts and Sciences graduate student, said she appreciated Chatterjee's careful representation of the country.

“She showed a lot of awareness of the role of journalists in shaping the way that people perceive India, perceive gender in India, and I thought that this self-awareness was very nice.”

This is a paid opportunity for undergraduate and master students to travel to North Africa, the Middle East, or South Asia to cover a story.

Amelia Carter, Assistant Director of the South Asia Center, said that Chatterjee's conscientious style of reporting was one reason that the organization chose Chatterjee specifically to lead this discussion.

“We were looking at people who have touched on gender issues in India,” she said. “There was actually another person we were looking at, but I felt that they definitely took more of the sensational, tragic lens and I appreciated that [Chatterjee] is more balanced and thoughtful.”