'What Exactly Am I Doing Here?' Reflections from a SAC Intern 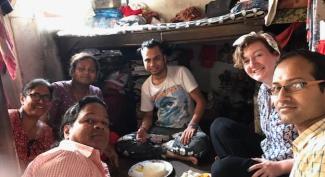 About a year and a half ago, my grandfather turned to me and said, “Connor, I could call you a lot of things, but easygoing is not one of them.” He and my mother went on to talk about my tendency to worry about planning, the noticeable change in my mood if I think we’re going to be late, my one-track mind if I don’t get a clear answer about something or feel that it’s discussed to my satisfaction. I understand that this is one of the less convenient parts of my personality, but a lot of the time it doesn’t affect those around me. Who cares that I triple check that I’m going to the right place, or gets there 10 minutes early? The thing is this mindset and tendency to want to plan everything is fundamentally incompatible with the work I’ve been doing for the past month. The work and research environment here has been wonderful, rewarding, exhausting, and utterly unpredictable. So, I’ve been forced to change.

In my time here, I’ve been conducting interviews with the LGBTKHQ+ community to build a Community Needs Assessment. The interviews make up the base of data that will be used to write an overview of the current state of this community and its needs. When I got the internship, I assumed that it would be a typical, 9 to 5 job, where a few people would come into some kind of office each day to give interviews. This assumption was completely wrong.

During and before my time here, Kolkata Anandam for Equality and Justice has been unable to find an office space. People are simply unwilling to rent the space to queer and trans community members, even though this is an organization with the means to pay for space. So, we’ve had to find other ways and places to do work. Legally, queer and trans members of the population are supposed to have equal rights since Section 377 of the Indian Penal Code (IPC 377), which declared “unnatural offenses” including sex with any man, woman or animal punishable by imprisonment or a fine, was decriminalized last September. This hasn’t been the case.

There are a few aspects of the research we’ve been doing that have been challenging. First, since Anandam is on a tight budget, the interviewees are volunteering their time without compensation. This means that interviews can’t take place when people are working, sleeping, or going about aspects of their lives that need to come before this. It was thanks to the community members coordinating the interviews that they happened at all – the relationships within the community meant that people were willing to pause their busy lives to take part in the project. Interviews start, at the earliest, around 2 pm. The number of interviews varies per day, but we usually conduct two to five interviews, each lasting between 30 minutes and an hour. Community members and leaders of Anandam would work tirelessly to find people, places, and times to do the work. Some days we took a train to a small town outside of Kolkata to conduct interviews, which means that we’ll get back home around 9 pm. Other days we do interviews in public parks. One day, we met at a bus stop and did interviews there for about 5 hours. Because of the uncertainty, I usually wouldn’t know if, where, or when interviews were happening until midday. Sometimes I would know the morning of.

The interviews themselves have by no means included light information. There were some that included graphic stories of violence and discrimination. The majority of the people interviewed didn’t know of any state support systems for the LGBTKHQ+ community. Many didn’t feel like they had social support. It took a lot of adjustment and purposeful time set aside to recharge in the evening.

Yesterday, we finished the last interview of the data collection phase, which puts us at 44 interviews total. We completed two yesterday, ending around 8 pm. We ate lunch together halfway through the day. We listened and looked at photos of the interviewee’s dance costumes. Although the constant change has been challenging, it’s allowed for interactions that probably wouldn’t have happened if we had tried to schedule them, a revolving door of life stories and trauma. Even though there wasn’t a clear idea of what was happening every day, I grew comfortable with the uncertainty. I trusted that something would happen and that somebody’s story would be heard.

Interested in reading more about Connor's experience abroad? Check out her travel blog The Travels of Squirrel Girl.